Second to Last Week on the Harbor

This week was a blast!

On Wednesday my group and I tackled the heat by walking the Boston Harbor walk to stay close to the ocean breeze. We also spent some time with a park ranger to learn about invasive species in the area. An invasive species is a non-native species that cause harm to the introduced ecosystem by consuming high numbers of native species, outcompeting native species, or being toxic or venomous. My group and I participated in MIMIC which stands for Marine Invader Monitoring and Information Collaborative. MIMIC works to collect as much data about population levels of invasive species all over New England. Some of the invasive species we see here in Boston are Asian shore crabs, Japanese skeleton shrimp, encrusting bryozoans, and golden star tunicates. I even saved a cool bug that was drowning in the water while looking for invasive algae! There are two ways that non-native species can be introduced into new environments, accidental introduction (traveling on the bottom of boats or the pet trade) or international introduction (aesthetics and pest control). One of the most common forms of introduction is ballast water. Ballast water is water that is taken in by big shipping boats or cruise ships to help with buoyancy, balance, and stability. The issue with ballast water is that it is brought across oceans and released into the harbors where these big ships are docking. Catching a ride in ballast water from the western-pacific is how the now very common Asian shore crab arrived on the west coast. My group and I even created our own New England MIMIC invasive species ID cards to help more people identify and record any non-native species here!

After lots of invasive species monitoring Wednesday afternoon, all of the STH staff went to Long wharf to board the youth sunset cruise. It was really cool to learn about all the work that other youth organizations like us were doing.

Thursday was just as hot as Wednesday, but we made due by visiting a park that had been designed for climate resiliency. It was completely prepared for sea levels rising and increased storm surges. The park had pathways that were angled to the harbor so any water could drain, there were benches that doubled as storm walls, and the whole park was elevated higher off the water level to be even more prepared! All in all, it was a really good week and I had a blast.

I am excited for next week but also upset that this summer is coming to a close.

See you all soon! 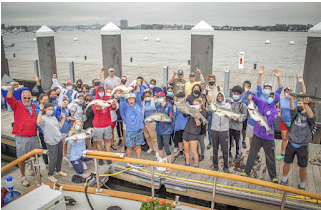 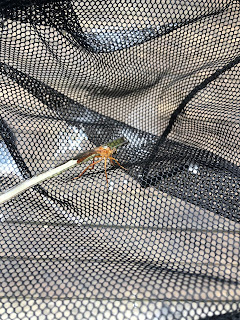 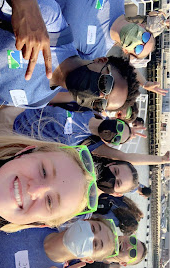