I had another action-packed couple of days with Team Jason! This week we were officially stationed in East Boston, but we were also lucky enough to get spend Tuesday visiting the New England Aquarium, which has always been one of my favorite spots in the city, so it was definitely a highlight of my week. We also spent some time at Belle Isle Marsh on Thursday, which was  very picturesque and beautiful. I would have appreciated it a little bit more if I didn't spend half of my time there swatting away hordes of bloodthirsty mosquitoes, but it was still very cool. Much more of the actual marsh was accessible than at Rumney, and so we were able to spot out cool bird species. We wrapped up the week at BPL Copley, where we worked on our deliverable for this week, which was focused around biodiversity and human impact on the coastline of East Boston. 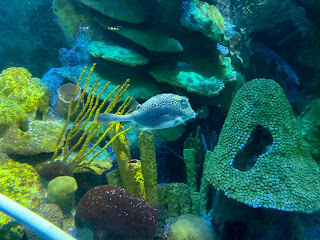 Like I said before, visiting the Aquarium has always been something I have loved to do, and I used to go there on field trips with my elementary school. Going back now as an adult was even better, since now I'm really able to understand and learn a lot more from my visits. For example, I read about a phenomena called ocean acidification, which is being caused by rising carbon dioxide levels in our atmosphere. Apparently, the ocean absorbs a lot of the carbon dioxide that is emitted when we burn fossil fuels. The carbon dioxide is then involved in a chain of different chemical reactions, the main effects of which are that the pH levels of the water decreases, and carbonate, a molecule essential to many marine creatures, becomes less available. Many shelled organisms, such as corals, mollusks, and sea urchins, depend on carbonate because it is a component used to form Calcium Carbonate (CaCO3), which their shells are predominantly made up of. Because of this, their habitats become a lot less sustainable in the long run. Paired with rising water temperatures and acidity, this is just another example of the far-reaching effects of our carbon footprint. I found it really interesting to think about the less obvious ways in which our actions can impact our environment -- I had already heard about oil spills, overfishing, and other more visible issues like that, but I never really would have thought about the decrease in carbonate levels and how that is directly impacting marine life. Pretty fascinating stuff. 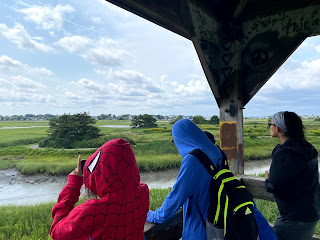 This week we also checked out Belle Isle Marsh in East Boston, a 188-acre wetland located right by the Suffolk Downs stop on the Blue Line. It was super beautiful because the flowers were in bloom, and of course all the shallow water meant that the place was swarming with bugs, who seemed to take a really big interest in biting us as we were walking around. There was an observation deck there, so we got some really good panoramic views of the entire marsh. It was also quite handy for spotting birds— one of our goals for these week was to investigate different species living in the East Boston area. For our deliverable, we did a bio for a bunch of these animals, including a lot from Belle Isle: egrets, ospreys, and saltmarsh sparrows. Altogether, it was a pretty good experience, and I would definitely recommend checking it out since it's so easily accessible using the MBTA. I think its quite interesting so see such a large marsh ecosystem lying mostly undisturbed right in the middle of a residential area. With the number of bug bites you'll be getting there it's not an outing for the faint of heart, but with some eagerness to learn and a buttload of bug spray, I can guarantee that its an enjoyable time.