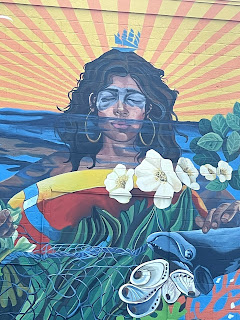 This week I had the amazing opportunity of going to Eastie. My group and I had the chance of walking around piers park and constitution beach. I've been to East Boston many times before but never really stopped to look at the beauty hidden. Walking around piers park and areas near maverick. At piers park we got to see children most likely at camp, they were out on the water sailing. We got to see how peaceful the area itself is. There is a park  located their for children of all ages to play and families to relax and allow their children time to soak in the sun and fresh air. There is so much more grass space, for playing a outdoor game or having a picnic. We walked around and saw a the structure which written on it, it said Noddles Island. In our time at Eastie we even got to go the ICA where they had these beautiful sculptures of walls but they weren't just plain walls. They looked like they concrete arches which had fallen into the sea and on them barnacles had begun to grow and the beautiful blue curtain they had in their gave the brief illusion that the arches were actually underwater and we were walking on the ocean floor along side them. There were speakers hidden everywhere giving the sound of the ocean while also telling the history of the arches. It was all truly beautiful.
`On another day of our time in Eastie we went to visit Constitution Beach where we had the chance to walk along the water and look at the different seashells that were there. We even had the opportunity to find different types of crabs on near the water. We found the corpse of a dead spider crab which may have been long gone its corpse was in tip top shape. We then got to see some green crabs both young and old which was quite fascinating and the baby crabs were absolutely adorable they were trying to pinch us with their little pinchers but you couldn't feel anything because they were so little. Seeing sea creatures was not the only thing we got to do though, we even got to pick up some trash off the beach and clean up a little in our time there. This week was very nice and Eastie has a lot more to offer than it might seem at first glance.