Day one of fishing club 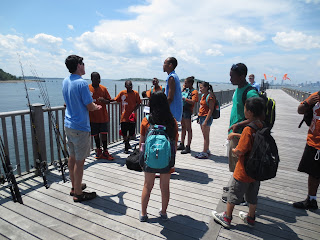 The second session at Camp Harbor View has officially started and I'm very excited to be apart of it. Camp Harbor View has all new kids in comparison to last session in July. There were some people from last summer that I recognized and they remembered me too. It's cool when kids come back to camp the next summer and still remember who I am. A few of the kids that were in fishing club last summer decided to join us again since they had so much fun before. I guaranteed them that this summer would be just as much fun if not more. Save the Harbor and Camp Harbor View staff have worked together to come up with ideas so that the kids experience is even better than last summer. 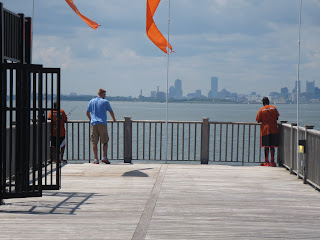 The kids in this sessions fishing club are very enthusiastic and optimistic when it comes to fishing. Some of them have fished before and some of them haven't, but they are all eager to learn new things and catch something that lives in the harbor. As soon as I pulled the rods out of the shed, the kids wanted to get right to it and start fishing. The kids that knew how to fish already were able to grab rods and begin fishing after we told them the rules on the dock. The kids that did not know how to fish were taught three ways to cast a fishing rod safely while on the dock. They learned how to underhand cast, drop cast and do a side cast similar to swinging a baseball bat. Once the kids had learned how to cast they were ready to bait their hooks and start fishing. 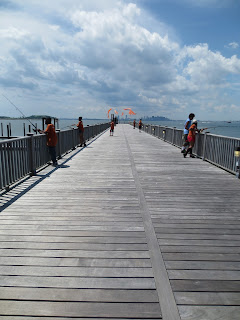 One thing I wanted to do was test each of the kids on their casting abilities and to see if the new kids had paid attention. I warned the kids that claimed they knew how to fish that they would be tested to make sure they were telling the truth. The way I tested them was by asking each of them to do one of the three casts for me. Even though it does not seem like a difficult task it's very important that they know what they are doing and learn something so that maybe one day they can teach someone else. All of the kids in fishing club passed the casting test and walked off the dock feeling comfortable handling a fishing rod. I was very happy to be able to teach the kids something and I really do hope that they each teach someone else what they have learned. 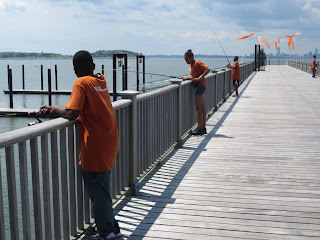