This past week at Camp Harbor View went by so quick! It marked the end of the first session of campers and allowed us to participate in many different activities. We didn’t fish every day as we were engaging in other camp activities, but the days we did turned out to be pretty eventful. One morning in particular many of our campers crowded as others yelled out ‘STING RAY’ while we pulled up our first skate. As a group, we took some time to discuss the skate before safely releasing it from the dock. It was a great week filled with lots of action! 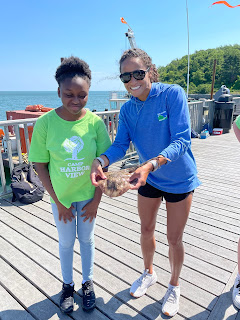 Through working on Boston Harbor, I have learned many interesting facts about the history of the harbor, the species that live within it, and the people who depend upon it. The facts I find most interesting about the harbor involve less of the water and more of the land surrounding it. Over the years, the city of Boston has expanded its waterfront. This expansion has increased the area in which businesses and houses can be built, as well as made more room for ships to come in for trade and travel. Now, nearly all of the land that touches the waterfront is man-made, expanding the city to more than 40 times its original size. One of my favorite places to visualize the changing waterfront is at the end of Long Wharf. Whether on a boat passing by, or on the land itself, looking at the Old State House from the end of Long Wharf has become one of my favorite views. The Old State House marks where the original waterfront in Boston was. Long Wharf was built straight out into the harbor, once looking much longer than the land surrounding it. In present, as the city has continued to grow, Long Wharf blends in with the waterfront much more than it once did. But if you happen to pass by its end, and observe the near half-mile stretch to the Old State House, you can take a moment to really visualize just how much our city has grown and changed over the years.

Boston Harbor is full of history and life. If you’re passing through or here to stay be sure to find your favorite view, you just might learn a thing or two if you do!