Hello everyone! To begin, take a look at two of these great pictures I took this week: 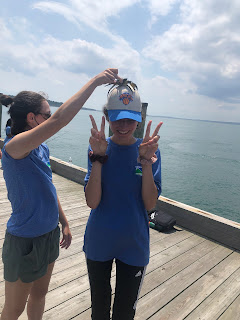 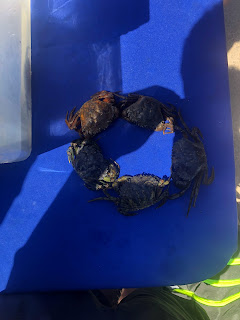 Now that you're trying to figure out what we are doing when we're working, let's talk about harbor history.  Basically, the harbor was dirty and we dumped everything from tea to sewage into it.  it was so bad you needed a tetanus shot just to work on a boat.  Then sometime in the 80s, the people were finally tired of this so they sued.  That lead to the creation of a water treatment plant, clean water, and also something called save the harbor save the bay.

Did I mention Spectacle Island aka trash island?  I was on it last Wednesday and it looks more like a park than a pile of trash.  like I said there were all kinds of weird things in the harbor including trash.  the story is that for many many years spectacle island has been where Boston, quinsy, and some other places used to dump their trash.  then in the 50s, a bulldozer sank into the trash pile. they decided to burn the trash because they have no room for any more, and it burned for 10 years.  after that nothing really happened for a while.  then they needed a place to put all of the dirt from the big dig so they put it on spectacle put some grass on top of that and threw in a park bench and it became a park.

This is about another island but unlike Spectacle Island, this one wasn't just a pile of trash for most of its life.   Georges Island is where fort warren is located.  back in the civil war, it was used as a prison for captured confederate soldiers.  it was that until a woman tried to break her husband out, and then it became a prison with a ghost.  there's also a dark arch that seems to be another attraction of the island.  back to the ghost story, like I said a woman tried to break her husband out so she dressed up like one of the guards rowed out to the island broke him out, and then he got killed trying to get to the boat.  the woman however was captured and was going to be killed for treason.  her last request was to be killed dressed as a woman.  unfortunately, there were no women's clothes on the island so they took some black drapes from the windows and made them into a dress.  after she died the soldiers started seeing a figure dressed in all black walking around, and tracks in the snow but just in a circle with none leading to them.

Dear Island is next and the one thing you need to know is that it isn't an island.  also its where that water treatment place that I was talking about in the first paragraph. That's where some sewage gets turned into water you can drink.  also, the solids go through a tunnel to quinsy where they get made into fertilizer.  That's basically it.  So, for why the harbor islands are part of the national and state parks department, I'm assuming that there were a lot of nice places that weren't being used with a nice view so they decided to make them parks.