Hey all, Sid again. This week marks the end of Week 4, the first month of July, and the first site for this summer. This week was a pretty normal one, as we had droves of people visiting us at BCM. On Monday we had the usual at Atlantic Wharf. We had our normal days at BCM on Tuesday, Wednesday, and Thursday. We were also able to do a MIMIC on Thursday, with Friday being our last day as a team. I was able to help fish and we were able to catch 10 green crabs. 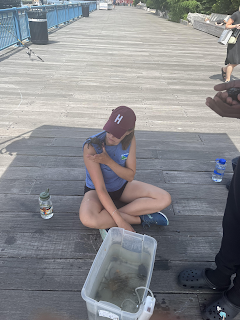 My favorite part of BCM was having access to plenty of crabs, green and spider. They were able to entertain the kids and were super helpful in educating them, as well as being able to find mussels under the nearby dock. Our site was helpful to promote contact and talk to lots of people about the harbor, however the canal near BCM is low on fish. This meant that despite the fishing rods being quite popular, they were rarely able to catch anything. Regardless, we were still able to divide the kids into equal groups (Fishing, touch tank, and drawing). The best day there was when we were able to reel up our old crab trap, which has 8 green crabs in it. 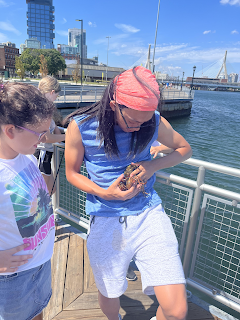 Thats the end of my final blog for July. Tomorrow, I'll be going on the first trip of August, and I look forward for everything else that happens in August. July may have been a hot month, but it was super fun and I enjoyed it.