Wild Week #2 with Will

Hey everyone! I'm back with my second blog of the summer. Today I will be talking about the ever so interesting history of Bostons' harbor. Here at Save the Harbor, we spend a lot of time at the islands off the coast of Boston and a few of them have quite interesting stories or events that occurred.

The harbor used to be disgusting. Disgusting is an understatement, there probably isn't a word to describe how gross the harbor used to be. There was so much trash in the water that you could barely even see the water. David Coffin described it as you could almost walk across the water because of how dense the trash was. People who worked on the harbor were also required to have a tetanus shot.

My personal favorite island on the harbor is Spectacle Island and I also think that it has the coolest history. Spectacle used to be a flat island that all of Bostons' trash would be dumped on. A decision was made that all of the trash on the island was going to get burned so it would all be gone. They did not think that the fire was going to last that long but it ended up being a smoldering ball of fire for about 10 years. After it was done burning, all of the dirt dug up from the big dig was disposed of on Spectacle, making two very large mounds. If you look at the island from the top, that's how it got its name, because it looks like a large pair of spectacles. There is no trash allowed on the island. Whatever you take on, you have to take off with you. There are no trash bins and the only real disposable waste would be our bodily secretions. When walking along the beach, you can find a beautiful collection of smooth and colorful glass. The ones that I like the most are the green ones because I just think it is a stunning color, an impossibly gorgeous version of green. The rarest colors of sea glass are red, yellow, and orange. I've only ever seen the red glass once and it was miraculous.

An interesting island is Deer island. It has these large eggs sitting on it and they store all of Bostons' sewage. Originally, all of the poop and pee would go through a pipe and flush straight into the harbor. It would be at the shore twice a day because of the way that the tide comes in. Nobody wants to see that so the large storage eggs were created to store all of the waste. This helped the harbor become much cleaner.

See y'all on the Harbor, 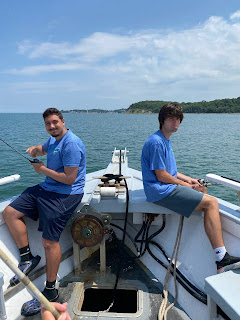 Will and Ruben enjoying themselves 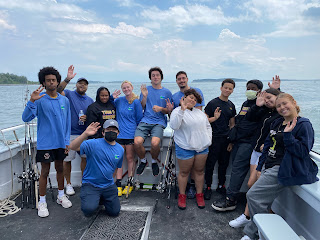 Team Maria with the Turn it Around group