Hey everyone, I'm back again for my third year at Save the Harbor. For those of you who do not know me, my name is William Haney. I live in a small town underneath Braintree called Holbrook. People pass through it all the time but never actually know that they have been there because it is so small. I will be attending Plymouth State University starting in the fall and I'm excited for my first year of college. I'm a very outdoor/ exploring type of person. I love playing sports in my free time but my favorite sport is soccer. It holds a special place in my heart and I try to play it every day. I have way too much free time for a kid my age but that isn't something to ever complain about.

I've been working at Save the Harbor for the past three years now and I have enjoyed every minute of it. Opportunities like this job have allowed me to meet so many wonderful people and make so many amazing friends. It's also crazy to think that without this job there would be so many things that I would not know about Boston and the harbor surrounding it. I love Spectacle and Georges island but without this job I never would have visited them or known anything about them.

My favorite thing that I have learned about Boston Harbor is the history of Spectacle Island. It used to be a disposal for all of Boston's trash. There was so much trash and they decided to set the island ablaze and burn all of the trash. The island was a smoldering ball of fire for ten years before the flame finally died out. When Boston performed the big dig, they needed somewhere to get rid of all of the dirt that the dug up. They tossed it all onto Spectacle Island and that's how the island's elevation increased.

Boston Harbor has a massive array of different species living amongst each other. The one that is not to be appreciated is the green crab. They are an invasive species that is ruining the harbor by eating many other organisms in the harbor. We are told to kill them if we catch them because there is such an abundant amount of them.

My favorite part of orientation was easily the fishing trip. Unfortunately, I did not catch a single fish, but I did get to see a skate which was pretty cool. I did see a seal swimming around in the water which I think is a thousand times cooler than the skate or any other animal that I've seen in person in those waters. See y'all back on the Harbor! 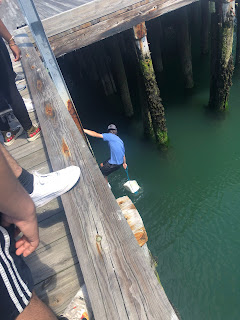 Will collecting water for the touch tank at George's Island 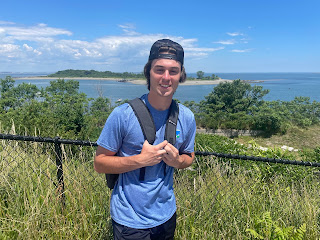 Will enjoying his time with a beautiful view behind him