If there is any word I would use to describe this week, it would be wild. There were so many things going on, from a frightfully hot day, to a beach event, to the return of a lost crab trap from Davy Jones' Locker. On Wednesday, the weather was so terribly hot that we barely got anyone at the Boston Children's Museum who wanted to fish! We didn't catch any animals that day either. But the very next day, we caught 8 crabs and interacted with 130 people! And it wasn't just crabs that we pulled up this week.

On Monday, we caught an itty bitty flatfish in our minnow trap--it was about 1.5 inches long! While I'm not entirely sure what species it is, I think that it might have been a summer flounder, also known as a fluke. These creatures live in the Atlantic Ocean, and can be found from as far north as Nova Scotia to as far south as Florida's east coast. They reside on the ocean floor, and camouflage into it to ambush the various different fish, crustaceans, and other invertebrates that they ear. Like cuttlefish and octopuses, they are able to change the color and texture of their skin to blend in with their environment. Given that they can grow up to 2 or 3 feet long, that must really help this ambush predator!

In addition to our flatfish, we found acorn barnacles stuck to the shells of many crabs. This broad category of barnacles can range in size from 0.8 to 4 inches. In order to feed on their preferred diet of plankton, they open up at the tops of their shells and let out their cirri. These feathery appendages allow them to catch whatever drifts by. They live in tropical and temperate ocean waters worldwide, and can be found stuck to rocks, docks, ships, and even whales! But how are they able to stick to just about anything? They secrete one of the strongest natural glues on the planet, which has an incredible tensile strength of 5,000 pounds per square inch!

Both of these creatures are doing fairly well conservation-wise. Summer flounders are considered least-concern on the IUCN Red List, and acorn barnacles are abundant. I hope that next week I will be able to catch some harbor animals that I haven't seen very much of, like black sea bass.

Talk to you next week! 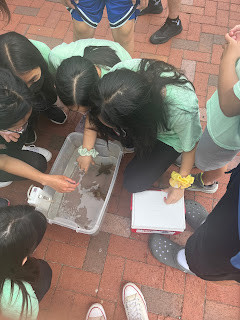 Monday's camp kids getting excited about the touch tank. 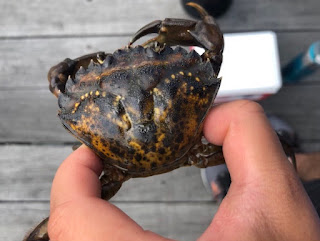 A green crab that has a pattern on his back that I think looks like a ram or an ibex.
at 11:48 AM