Hi, this is my third blog of the summer, and this week we had new kids arriving at camp harbor view super excited to learn about fishing and the harbor. One of my favorite things this week was seeing so many kids talk about how they wanted to go to our club and learn how to fish. We also had another talent show once again at camp harbor view and I would say it was one of my favorite parts of the week. Another highlight of my week was catching our first fish because we hadn't seen a fish till week three.

Although we did not catch as many spider crabs as we did during previous weeks we did catch a few and I will say that they are one of my favorite catches every time I go to work. The spider crab has the ability to camouflage itself with its spines, tubercles, algae, debris, and small invertebrates. The shell of the common spider crab measures about 4 inches from the front to the back. The spider crab lives on the Atlantic coast of North America and that's why when we go fishing at the harbor they are very common. The spider crabs can be found living at the bottom of our harbor and some along the seafloor of japan's pacific coast. Although they would eat dead things they will often fee on large starfish. A last fact about the spider crab is that they would often walk in a forward motion even though they are capable of side-stepping like other crabs.

One of the most common things we caught this week is the green crabs which are super invasive to the Boston harbor. When I describe green crabs as invasive I mean that they were never here in Boston and when they did come over here maybe by boat or some other way they become overpopulated in this new area and soon become harmful to the environment. A fun fact about the green crabs is that the females can produce up to 185,000 eggs at a time which is why they are known as one of the most invasive species in the marine environment. The typical size of an adult crab is 6-10 cem in carapace width. The green crabs live on rocky shores, cobble beaches, sand flats, and tidal marshes and often eat clams, oysters, mussels, marine worms, and small crustaceans.

I'm excited for another week at camp harbor view and hopefully, it isn't my last time this summer at camp harbor view because I met so many great people working there. I hope one of the kids catches something new that we have not yet caught yet because that is always exciting.

See you on the harbor, Harry 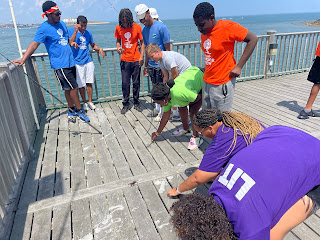 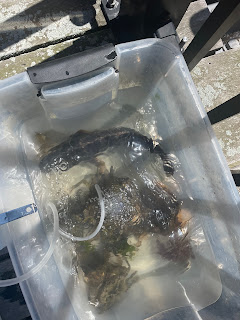