Hello again! This week at Piers Park we had much less finds. Even with few finds, one of the Piers Park counselors caught a Mackerel fish (pictured below). We also caught lots of crabs in the crab trap, even a pregnant crab which is pictured below (Aleena is holding it).

On our fishing trip with Courageous Sailing on Tuesday we didn’t catch any fish sadly, but we did pull up a bunch of large lobsters from the lobsters trap in the harbor. One of the kids lessons/activities this week was also to draw a landmark they were told about, one of which is Spectacle Island. 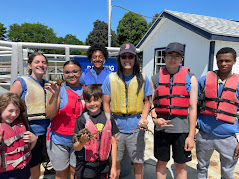 To the kids Spectacle Island is an island shaped and named after a pair of glasses but there’s much more than that. Spectacle Island was originally a trash dump and incinerator dump for all of the Boston area up until 1950’s. Despite it simply being a horrible thing, there was also a bulldozer that was supposedly swallowed up by the trash. They eventually stopped the trash dumping there and set fire to the trash that burned for 10 years. One thing though, besides it being horrible for the environment, not all trash burns, for example glass.

Sea glass can now be found all over the beach on Spectacle Island! You can find circular bottle heads and much more. Go have fun exploring but remember, you can’t take any home.

Catch you next time,