The History of Spectacle Island

This week, my All Access group taught kids about crabs and fishing at Carson Beach, Spectacle Island, and George's Island.  We had a great time at all of these sites! It was so fun to see kids get excited about the harbor wildlife.  Holding and touching the crabs was their favorite part. No one caught a fish but we caught so many crabs, including a large spider crab at George's Island. 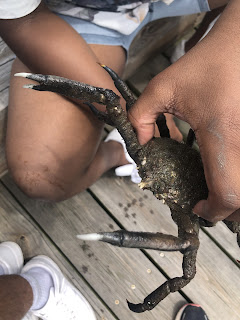 At Spectacle Island, I was able to hike up the North Drumlin with other members of my group before the fishing began.  We learned all about the history of Spectacle Island.  The land was originally inhabited by Indigenous peoples, where they farmed and hunted.  In the 1800s, English settlers built hotels there and the island became a vacation destination.  Later on, Spectacle Island became a glue factory, where horse carcasses were brought to the island and turned into products like glue.

In the early 1900s, Spectacle Island became a trash dump for the residents of Boston and the surrounding neighborhoods.  So much waste being piled on top of the island made the once flat land hilly, (with the North Drumlin and South Drumlin) and increased the land area of the island.  By the 1950s, trash was spilling out into the Boston harbor, and the mountain of garbage on Spectacle was so high that a bulldozer sank into it while trying to pack it down.

After the bulldozer sank, the city of Boston began burning the trash on Spectacle Island. The Island was on fire for ten years, before Boston took the dirt from the Big Dig (in which I-93 was built) and piled it on top of the trash. Trees were planted, grass grew, and now Spectacle Island is a park.  The only evidence of the trash that was once there is its beach glass. Because glass doesn't burn, it sank down through the pile of garbage and became smooth along the way.  Today on the beach of Spectacle Island, you can find pieces of bottles, cups, and ceramic plates. 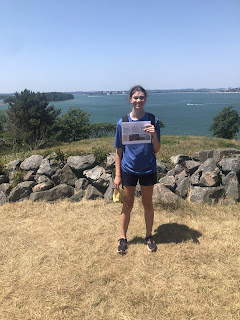 Sea you on the Harbor!