Hello everyone, Aidan returns for blog 3 for week 3 of year 4 of shsb. This week was incredibly hot, but as is the nature of our job, we were alright with the cool ocean winds to reduce the heat outside. Monday was our usual day at Atlantic Wharf, with a little rainfall spoiling the last half hour of our day. On Tuesday we returned to Bcm where we hauled up a green Crab I named Eugene. Eugene was special because he was the most chill crab I ever encountered. I could perch him on my shoulder like a parrot! On Wednesday we had a Beach Bash at Constitution Beach, where all the big news stations showed up. While there, I caught a multitude of hermit crabs and baby green crabs (the beach was likely a nursery for baby crabs to thrive) which I supplied to our touch tank. Thursday was a special day at Bcm, because we reeled up our old crab trap that we thought was lost to the harbor! We lost it originally when the black rope tied to the trap came undone. But when we reeled it up, it was loaded with big green crabs.

One species I found today was the European Green Crab. An Invasive but successful genus, green crabs are well designed animals, growing up to 3.5 inches wide from carapace tip to tip, and sustaining a body that can take advantage of speed, stealth, power, and toughness, with a very active sensory system. They are not only invasive to New England, as they have conquered shorelines across the continents.

Another animal I encountered was the ciona. cionas represent animals when their adaptations aren't under predator-prey pressure, thereby eliminating the need to shape ciona's body as a weapon. A simply organized bundle of cells, it has two valves on the top of it to circulate water, oxygen, and filter feeding systems. it has a sticky base it uses to colonize surfaces. It is also considered an invasive species.

That is all I have for you readers this week! Next week is our last week at this month's site, so I'll try to make this the best week. However, I have a vacation house in NH to get to so... 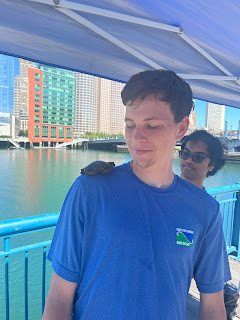 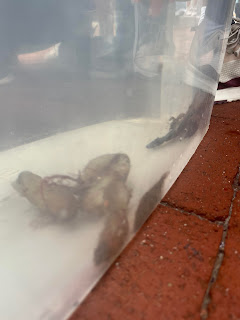