The week started how it normally starts, playing games by the Atlantic wharf and drawing. The next day was very hot, and in fact, this week was very very very hot. It was nice but also I think made everyone in our group a little crazy. By the end of the week, Aidan had started advertising crabs to people like a salesman, and I rode a shopping cart very loudly trying to go as fast as possible. It caused some boring times because people wouldn't want to stand outside in the burning heat, but we still had a decent amount of people come by. The most interesting part of the week was when we discovered a crab trap we had lost last week, filled with 8 crabs that we could show people. We named all the crabs, and I think we found a crab we had had before, Eugene. 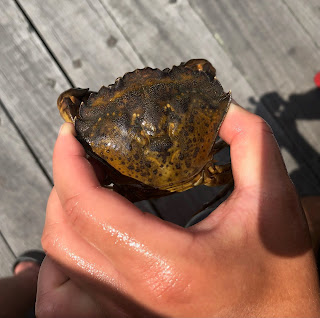 We did catch a fish this week, but I wasn't fishing when we did so I am just going to cover something else we got. We can commonly find mussels under docks near us, and we sometime spick them out and put them in a touch tank. They are usually about 2-6 inches, and the ones we found were about that size too. Freshwater Mussels are known as Naiads and come in more than 1000 species. When considering both freshwater and saltwater Mussels, they can live in most of the world, in lakes, ponds, and oceans. They eat phytoplankton, diatoms, other microorganisms, and also bacteria. 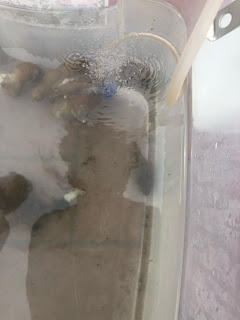 Something that we caught last week that I hope I can catch again is a spider crab. They are huge for crabs, the biggest species can be as much as 13 feet from tip to tip. Different species live all across the world, from Japan to Europe, to America. They live on ocean floors, often under the mud. They are scavengers and like eating dead or decaying fish. Next week I am excited because It will be my last week on this site and I'm excited to be moved to a new interesting location.