Week 2. We caught a real fish this time.

Hello again to all you wonderful ocean fans out there. This week, we caught some very cool critters with squid and sliced hot-dog alike. At Piers Park, we continued in teaching kids how to fish, and were pleasantly surprised when one of the Sailing Center staff managed to catch a Mackerel on one of our fishing lines. Up until now, we'd only managed to catch crabs and skates, so this was a surprise to everyone. We're looking forward to catching more of these wiggly little fish creatures in the future, and we'll keep you posted if we manage to haul any up!

We were also excited to go on a fishing trip with the kind folks at Courageous Sailing Camp at the Charleston Navy Yard. We returned to the Belle and had a blast teaching kids to fish and hauling up crab and lobster traps. Some of the highlights from that trip were the sea bass we'd caught, and some of the positively HUGE lobsters we found in some of the traps. 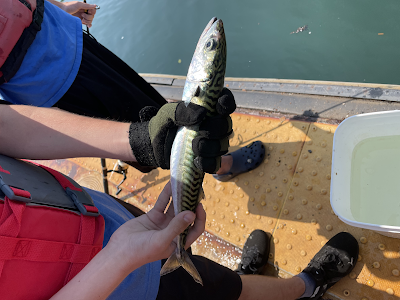 Spectacle Island was a large trash dump until somewhere around the 1950s, when it became a large burning trash dump. While it may seem far into the past, it's a strange thought that there are still some residents in Boston for whom Spectacle Island was a big landfill for the majority of their lives. It is a nice and pretty island now due to over a decade of environmental cleanup efforts.

What most people fail to recognize, however, is that the island wasn't always a Trash Dump either. It only became a dump when the trash Incinerator built on the island stopped working in 1935, at which point people decided it was easier to dump their garbage there instead of fixing of building a new incinerator. What's even more interesting is that in 1857, Spectacle Island was actually home to a horse-rendering plant, where dead horses were processed and turned into usable goods, like soap or glue! How neat is that? 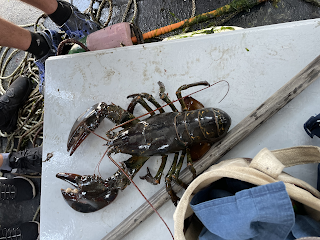 Anyways, sea you on the Harbor!
Albert.