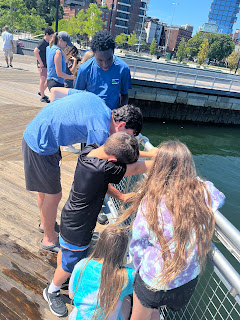 Hey everyone, it's Aidan here for week 2 blog for year 4. Our second week has been great and I'm looking forward to week 3. This week was my first full week, where I spent a lot of time at BCM (Boston Children's Museum). It was very busy and very hot, but lots of fun. While there we caught a cunner fish and a huge spider crab in our crab trap, who was just small enough to fit in the terrarium. For the most part though, we caught green crabs, getting more and more as the week went on.

This week's theme is about Harbor History, so let me fill you in on Spectacle Island's past. Before it was lush hills, it was two beaches connected by a sandbar. For a long time, it was used for trash dumping, trash which blew into the harbor. It filled up so much that it was towering over the harbor as a mountain of trash. At one point a bulldozer treading the trash heap sunk into it. the driver escaped, but the bulldozer was never found. Finally the city of Boston was sued by its own people to clean the harbor, and that it did. A major solution to this was by terraforming Spectacle Island from a garbage heap to a nature site. This was accomplished by burning the trash on the island (which burned for 10 years!), and filling the island with displaced dirt from the recent big dig. This was one step of many that turned Boston Harbor from one of the dirtiest harbors to one of the cleanest.

And that's all I have for you today folks! The first full week was a blast, and I'm hoping for more fun this week. I do know that I'm going to  beach bash on Wednesday, so that will certainly be fun. In the meantime, I'll see you all on the next blog. 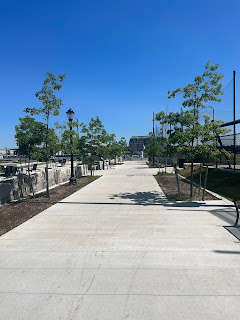