My week at my site was good! It was great weather and one camper caught a Skate which was really cool. I have never seen one before and we got a winter flounder in our crab trap which is really cool. I brought my speaker with me and we were listening to Disney song and guessing which movie it was. On the last day of camp they held something called the hustle which is kinda like the amazing race. It was really cool. We were cheering for all of the groups and  got some face paint and necklaces for the colors. It was fun watching the kids run around and try to beat each other in their games and then they had a talent show.

The harbor used to be so dirty and nasty, they used to dump it on Spectacle Island, the island was filled with trash it was overwhelming. It had I wanna say 10 years of trash on it. To get rid of the trash the burned it for 10 years. They soon made deer island into a place where they put our poop and urine and clean it. They built a massive tunnel to travel to deer island with our waste and because of that the harbor is now clean.

See u next time on the water- Ari 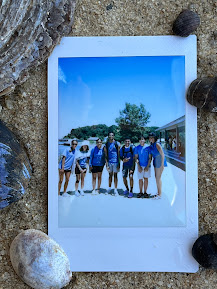