Back for Another Summer!

My name is Henry Burns, this is my second year at Save the Harbor, I'm 16, and I'm going to be a senior at EMK, I'm interested in basically everything and I play hockey and run track.

I'm very excited to work at Save the Harbor again because last year was so much fun, and it's also one of the best jobs in the world.

one thing I learned about Boston harbor is the invasive species the green crab is everywhere.  yesterday when my team was getting crabs for the touch tank we found almost all green crabs and maybe one or two that weren't.  when I worked here last year it was the same thing green crabs and nothing else.

I've learned a lot about the history of Boston Harbor.  I know that sewage used to be dumped into the harbor and that you would need a tennis shot just to work on a boat.  then some time in the 1980s people sued the city which led to the creation of a water treatment plant that made the water so clean you could drink it.  also spectacle island the place I'm going to be spending a lot of time on this summer used to be a pile of trash that was burning for 10 years.

I missed orientation this year so my favorite memory from this past week was when me and my team were playing a game of spoons on the boat to and from gorges island.  it was a fun game to pass the time and I also managed to win the game that we were actually able to finish.  also, the attempt to get water for the touch tank was very memorable considering none of us realized there was a ramp down to a dock right on the water instead of the ladder.  what made it even worse is that I also had to climb down the ladder to get the crab trap line unstuck. 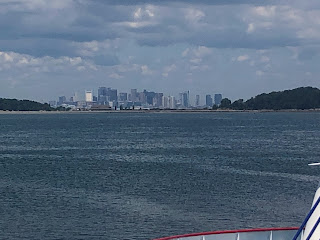 Picture of Boston from Georges Island 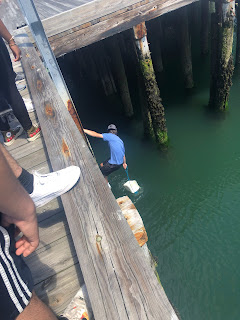 Image of my team not realizing there's an easier way to do this
at 1:50 PM