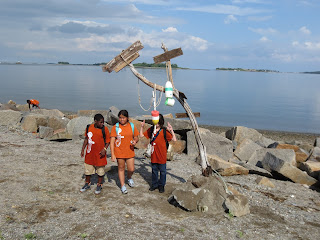 Yeaterday, at CHV I decided to try something new with the groups that we see after fishing club. When I arrived at shell beach the first group was already in a circle waiting for us. The kids were anxious to know what they were going to learn and do with us for an hour. In less than a minute I thought of many things that I could tell them and ask them. I wanted to see what the kids knew about Boston Harbor, how they felt about it and what they wanted to know about it. I feel as though a good way to get kids engaged in something is to get them thinking and answering the questions they have.


Many of the kids in the groups wanted to know more about what was around them. They're on Long Island everyday surrounded by islands, Boston Harbor and different towns. They have looked around, but can't really identify the things that they see. I feel as though it's our (Save the Harbor) task to inform them and give them knowledge about Boston Harbor and the different things that they see everyday. One of the things I wanted them to be able to do is point to some of the places they do know such Boston, spectacle island and the harbor. These facts may seem common to me, but many of the kids do not know them. So, I'm glad that I was able to teach them things that they did not know and would probably tell someone if they asked. 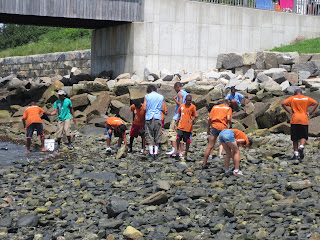 After we told the first group a good amount about Boston Harbor they were excited to go explore shell beach. Some of the kids were so excited that they began running to the beach before we were even finished telling them the task. The task we gave them and give every group is to find something on shell beach that they think is cool and tell a Save the Harbor staff member why they think what they found is cool. There are no limits to what they could find as long as they find something and have a reason for why they picked up and want to show it off. The kids find things such as shells, sea glass, crabs and even skeletons of animals that live in the water. The kids really enjoyed trying something new and it's definitely something that works and we're going to continue to do. 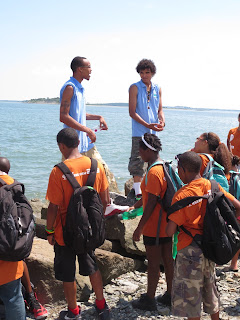