Piers Park today was full of interesting events! At Piers Park Sailing Center the boys and girls were already curious as to what I had in such a large box labeled "Fresh Perishable Seafood". Of course, I kept my mouth sealed because I knew Ali had an intuitive lesson planned for the children. We all gathered up the children and asked each of them what they thought was inside. Some children guessed lobster, others guessed crabs. Despite the fact that we had to give them some hints, a small 6 year old child named John guessed correctly. it was a striped bass! All of the present children had a chance to hold the immense fish in their very own miniature hands. Ali also dropped some knowledge about how if you rub your finger on a fish's body, your finger would just slide across. On the other hand, Ali said that if you slide your finger the opposite way, your finger would encounter a certain roughness caused by the fish's scales. 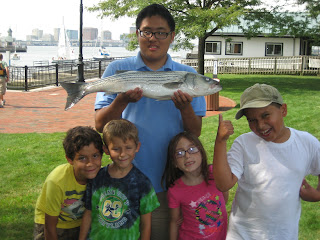 Courageous Sailing Center was not to be outdone by Piers Park. Today at Courageous Sailing Center some kids and I manhandled some lobster traps onto the dock. Alas, there weren't any lobsters in them, but there were a good amount of crabs skittering around. Inside our floating crate some children and I watched an astonishing event unfold. A female crab actually tore a claw off of another female crab! The children were shocked. Even with my best efforts I was unsuccessful in retrieving that claw. The crab was holding the claw so firmly that the ripped claw had a sizable crack in it! Personally, in my one and a half summers with the organization, I have never seen this occur. Today might just be the most captivating day of the entire summer! 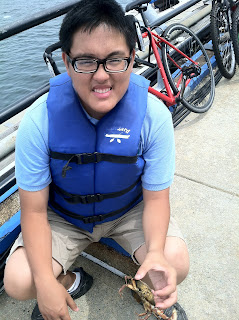 Looking forward to an amazing summer,