This week has been fun. I was on the island this week. Spectacle Island it was! On Thursday, Manny and I went to the top of the hill to fly kites with the kids, but the kites didn't work at all! Some of the kids were upset but we made the best out of it. Manny and I had to come up with something to do with the kids, so we decied to play what the kids call "fishy fishy cross my ocean". That game was so fun and funny, the kids were running everywhere. We finished the first game and the kids wanted to play again so we played again. After the second Manny and I took the kids to the beach. 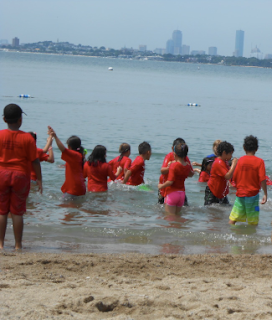