Kayaking on a pair of Spectacles

Usually at Spectacle Island swimming and flying kites are points of interest for most people. I chose to go kayaking with my fellow workers Carolyn, Thi, and Andrew the Beast. This was something that I had done before at Community Boating but taken to a new extreme. When we went kayaking we went over safety procedures and precautions of to do and what no to do. The kids were all scared to go kayaking because the weather wasn't the best and they were scared. So the staff tried it for the first time. Our instructors Kevin and Dennis were laughing when we got on the water. Beast and I flipped more than twice there were many problems such as bugs, water in the kayak and waves. I flipped battling waves and was forced to swim back to shore. 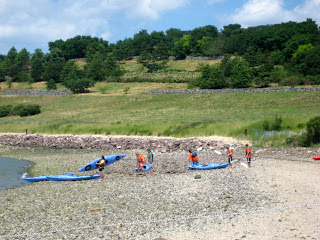 Thi and I were the only two who were devastated when we saw Beetles, and other insects on us. I freak when there is something on me and I can't see it but I can feel it. These were some of the things that caused me to tilt and lose my center of gravity. The kids that went the day before explained to me some of the things that we should do and I didn't comply to what they were telling me and the worse happened. It was a blast and something that was really fun. Kevin the instructor asked for some of us to go back out with him again next time with a group of kids which I am looking forward too.