View of Tall Ships from the Provincetown II 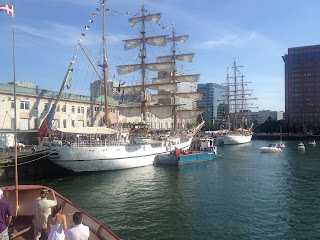 If you were around the harbor this weekend then you know that the Navy is in town! To celebrate the bicentennial of the war of 1812 the harbor has been filled with naval vessels and Tall Ships. To get a better view this Saturday I joined Bruce, Patty and some of the Save the Harbor staff on the Provincetown II.

We cruised around the harbor learning some history about the ships and getting an up close look at these beautiful vessels. My favorite fact of the day was about a ship that left the harbor with thousands and thousands of gallons of water, rum, wine and whiskey, when it returned to the harbor months later all of the rum, wine and whiskey was gone but there was still plenty of water to spare. I guess we know where the sailors priorities lie.

I had never seen a Tall Ship outside of a movie and they were a very cool sight to see. Some of the tall ships in the harbor have traveled all the way here from South America. The ship in the forefront of the photo, docked right in front of our offices, is the Guayas from Ecuador. I highly recommend that you take the time to come down to the harbor during this celebration and enjoy your own ride on the Provincetown II.

If you're looking to combine your Navy Week fun and Fourth of July celebrations I suggest coming to watch the USS Constitution, Oldironsides, make her annual voyage out into the harbor where there will be a 21-cannon salute and the Blue Angels will fly over the harbor. It's something you don't want to miss!