A Week at Revere Beach!

This is my first offcial week working for Save the Harbor/Save the Bay. This week my group and I were placed at Revere Beach. I learned some things about Revere Beach that I never knew, like did you know that Revere Beach was the first beach to become a public beach? This week was an experience for me because I've never go to the beach to learn things or discover the creatures in the ocean. I'd have to say that it was pretty hot this week, but that didn't stop us.

The theme for this week was the Boston Harbor Cleanup. The Boston Harbor used to be very    dirty and gross. It was filled with trash and a lot of unsanitary items. It was very unhealthy and hurt the ecosystem. The people of Boston then took action to help the species that were affected by the condition of Boston Harbor. There were tanks built on Deer Island to help the organisms that were in an unstable environment. These tanks treated the area's sewage. With all the hard work that was put into the harbor, Boston now has one of the cleanest and sanitary harbors.
The first day we spent some time trying to get to know each other so we can split the work. As I spent a couple of days at Revere Beach I would describe it as a sandy beach. This beach was generally a shallow beach, the waves weren't too big either. Revere Beach has a beautiful ray of sunshine throughout the whole day. So if you ever want to tan, make sure to come on down to Revere Beach! Each of us had a different role. The first day was kind of hard because we didn't catch any animals as we hoped we would. But we did take a couple of pictures of different animals we came across. We learned about the the different endangered species that live on Revere Beach, which include the Least Tern, Common Tern and the Piping Plover. 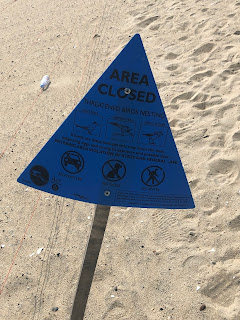 The second day we were determined to catch some fish. And we indeed caught a Striped Bass. We also saw jellyfish and some crabs. We finally figured out what we wanted to portray in the lesson this week. We noticed how low the tides were in the morning but how much they increased throughout the day. We didn't discover a lot of animals but we did see a lot of algae/seaweed. 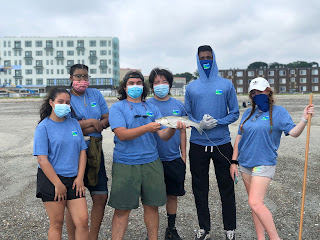 The last day at Revere Beach was a more relaxed day, we tried to catch some fish but we didn't have any luck. We did discover a various amount of little creatures. We found a couple of crabs and shrimp too. We also decided to come together as a group and collab all of our ideas together. We split amongst ourselves the different topics we were going to talk about. 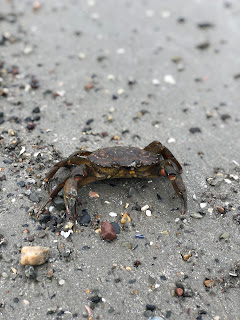 Overall this week was pretty good. Not only did I learn about the beach but I also learned more about my group members. We all get along pretty well and work well together. One thing I liked about this week was learning about the different organisms. One thing I didn't really like the beaming sunlight. The sun was so strong I nearly got a sunburn on my face. I am excited to be placed at a different site and to learn more things next week!
Sea you next time!
-Arianna Perez