Malibu Fun in the Sun! 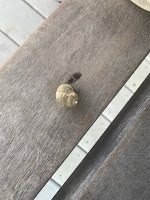 The most common sea animal we found was a periwinkle sea snail. They are commonly found on rocks and seaweed on the shallow part of the ocean. We see tons of them but a cool fact is that they aren't native species of Northern America, they were introduced by western Europe. The biggest they can grow in 1-inch long. They can also survive days being outside of water. Their main source of food is algae. The down side of this is that a study shows how they're turning the algae from green to grey.


Catch me in the sun,