First Week at Save The Harbor 🦄

Good Day! My name is Pre’Yelle Grinkley, I am going into my Senior Year as an  Instrumental Music major at Boston Arts Academy. I’ve been studying the Violin for almost a decade. Music, in general, is something that I’ve always had a connection with and I enjoy playing instruments, composing, arranging, and exploring all types of music from many parts of the world. I am also very interested in Sports ! I’ve been playing Basketball since I was 8 years old, the teams I’ve played for so far are the Shelburne Alphas, Fenway High, Baystate Jaguars, and C.A.S.H. Even though I’ve been into music and sports for the majority of my life, I enjoy other subjects such as Mathematics & Bioscience .
This summer, at Save The Harbor, I’m most excited to learn new facts about the harbor, how to fish, & finally see people in person for the first time (since quarantine began). So far, I’ve already learned how to identify Moon Jelly’s at Carson and I’ve already been to spectacle island to identify marble & sea glass ! David makes everything Super Fun so it’s easy to ingest the facts he teaches you.
I most definitely want to learn more about different islands on the harbor and their names, which will obviously happen. I’m just really anxious to do so ! I also want to learn more about the history of all of the beaches. What important events took place that potentially have affected us NOW ? What can we do about it ?
One of my favorite parts of orientation was simply just being on the beach !
I haven’t been around anyone my age for the entire quarantine, which is extremely depressing 😂 BUT ! I enjoyed my time at orientation learning who my co-worker’s are as well as who would be in charge. Everyone seemed to be very genuine and excited to spend the summer with us ! I never really had that experience at other jobs. I’m glad that everyone at Save The Harbor creates a comfortable and welcoming environment for newcomers as well as former Save The Harbor members. 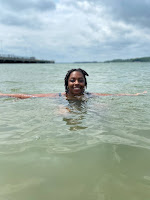