For our second week of the summer, we enjoyed our time at the Four Point Channel of South Boston. home to many of Boston's most iconic places such as the Boston's Children Museum and the  Boston Tea Party Museum. During our time at this location, our group was fortunate enough to be able to use underwater drones and we were able to observe the fish in the channel. While we were only there a day, we didn't manage to locate most of the species that occasionally swim by during the day such as small schools of fish or even lobsters that the bottom of the channel. We did end up having a few technical issues with the setup of the app for the drone but once we figured that out, our team was able to go back to business. However, a small striper did end up crashing into the drone which gave our team a good laugh. For the rest of the week, we ended up going on a fishing trip with Captain Charlie. While I was not lucky enough to catch a fish, the rest of my team caught a couple. There was a lot of fish that ended up being caught unfortunately none of them were big enough to keep. This had been the first time I had fish in about a year and with the pleasant temperature of the day, it made the trip extremely enjoyable. Our team ended up catching some skates, one black seabass and a few cunners. Since we were not out that far we were able to reach the bottom of ocean with our rods which limited our fish to mostly bottom dwellers.For our final day, we ended up boarding the Roseway which use to be a fishing boat for swordfish. On the boat, we learned a lot of useful information that benefited us in our deliverables. Such as how to locate ourselves on a map and how to tell the distance between landmarks on a map. We were also able to use tools that could check the pH of the water in the harbor and the amount of salt the water at different times! We even ended up learning a bit about marine life nearby!
The marine life in Boston Harbor varies depending on how far you are from the land and what season you are currently in. There a huge range of animals who call the harbor their home from seals to lobsters. The lobsters and the crabs in the area found almost everywhere by local fishermen. The seals can we see during the colder months of the years and have been occasionally seen when Save the Harbor has its fall time cruises. However, with the recent modernization of Boston in the last few decades, the population of certain species has gone down. The bird population has had to struggle with finding suitable homes with the reduction of trees in the city. Eelgrass which used to be found everywhere in the harbor, but after the BIG DIG there are only a small amount of locations in which the eelgrass is still present. Hundreds of years ago the harbor used to be teeming with populations of salmon, unfortunately, the development of the cities in the 1800s shrunk the population by a significant amount. Even so, there are still a variety of animals that you can see in your everyday life just by walking near the water, and hopefully this summer you are able to witness them for yourself!
Sea you out on the harbor!
Albert 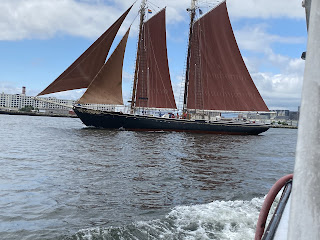