This week, team Luke went to Castle Island and learned about its history. It was really fun and very, VERY sunny out there. I got a sunburn on my first day :) so that was nice, but other than that I think we had a great experience. We fished, took some nice pictures around the "island", watched a video about the pollution in the harbor, and talked a lot about the history of our site. It holds one of the oldest forts built in British America that was later named Fort Independence after the Revolutionary War. There's a monument dedicated to Donald McKay who build some of the best clipper ships in America. We also learned that the Harbor used to be the "dirtiest harbor in America"; you couldn't swim in it or even fish. It was so disgusting from the litter and sewage that got dumped into it, butchers even threw pig heads as well, as if it was just some big trash can. But after a huge investment, the hard work of thousands of people, and a court order, deer island now holds the famous Wastewater Treatment Plant, which keeps our harbor clean. As well as that, we are stationed at different sites at the harbor, keeping a watchful eye on those precious waters. We want to keep the harbor clean, but also teach others of its past so we never go back to such a state, and our harbor STAYS the cleanest it can be. We know that it is very different than it was back then, you couldn't see the bottom when it was low tide because of how much waste was there, but now you can fish and actually catch something, you rarely see any trash when it's low tide and if you do, you know to pick it up. We have the ability, (and we did) to go down to the rocks when the tide is very low, and see what creatures we could find, and I think that's an amazing privilege we have and that we can learn from our experiences there. It was great being on Castle Island and I'm looking forward to the site that comes next.

Sea you out there,
-Jane 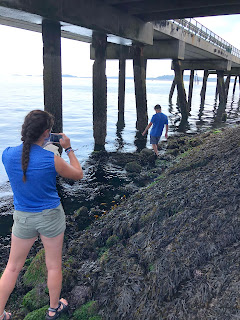 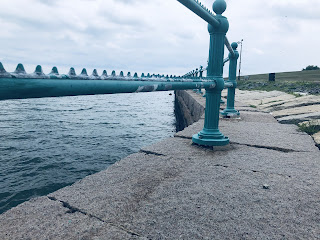