Heyy everyone,
This week our topic has been about climate change and resiliency. Though my neighborhood isn't as close to the harbor as the rest of Boston, flooding would affect where my friends and I meet up to hangout and to eat. Making plans in the future may be a little harder as the temperatures rise and extreme weather starts to occur more frequently, and no one wants to be outside when its hot or when there's a storm as well as the possibility of transit lines being delayed. I was with my friends yesterday and it started raining very hard very fast, and after having a lot of fun during a sunny day, we ended up going home soaking wet on the slow moving train with the AC on. It sucked. Flooding is a big risk for the seaport and neighborhoods closer to the coast, and we learned about different resiliency plans that could help prevent it. Specifically in Fort Point Channel, there are plans to enhance park space, like adding trees and other vegetation to help stop flooding, as well as extending the harbor walk and turning bridge guard rails into flood walls. A deployable floodwall has already been built in East Boston, so that's a start. Assistant Deputy Director for Climate Change & Environmental Planning for Boston, Chris Bosch, made a video explaining impacts of climate change and more, and compared Boston's future climate to southern states like Alabama. Just thinking about that type of heat was scary to me, we are known for having all types of weather, and having the idea that we could have temperatures like Alabama had never crossed my mind. Kamal & Dee trying to get the underwater drones to work
This week we hung out at Fort Point near the children's museum. It was raining Wednesday morning so we went under the bridge near the Barking Crab. We actually ended up seeing a few big blackfish (tautog) and an eel. We got to use underwater drones which took a while to figure out but turned out to be really fun to drive around. We got it to do some pretty cool tricks, and by we I mean Kamal. He could actually make it back flip while I couldn't even navigate when I went underwater. Other than that we fished and used the crab trap as well but were at a loss for luck. We didn't catch any fish or crabs, but the trap got caught on the dock and ripped so that was fun. Figuring out how to set up our lesson plan was actually pretty fun as we were all in a group working on it and asking questions and discussing while also working separately on our own parts. Overall it was just a great week. 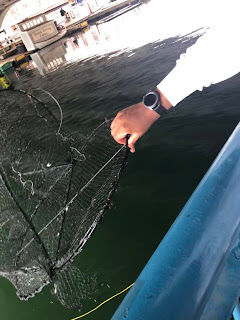 Our ripped crab trap
Don't worry Grace fixed it :)
The only question I'll bring up is ways to prepare for rising temperatures. Not going to lie, If it's going to be as hot as Alabama one day I'm going to be a little bit mad. Especially for those of us who don't have AC. Are there resiliency plans for the heat or do we just have to try and stop it before it gets here? To advocate for climate change in Boston I first want to be educated about it as much as I can, but programs and jobs like this one are are great way to raise awareness about the environment and climate change. Education is so important, and we are in a great position (if Covid wasn't holding us back so much) to let those younger than us and have the potential to make change like we are doing by knowing about the problems in our world. 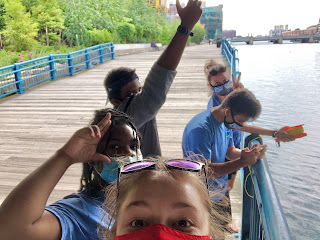