Hey there welcome to week one,

This week we had our first summer activities and I had the opportunity to be at the Navy Yard in Charlestown. Prior to this I have only been at the Navy Yard once before. My first time was last year on our group trip with SHSB. We were able to go into the museum and learn about the men at sea, what they ate, and when they were on their trips. This week I learned more about the history of the boats sitting in the harbor and the area surrounding them. A few things I learned were that the Navy Yard opened in 1800 to help maintain the ships that were needed in the US Navy. The most fascinating fact I learned is that the USS Constitution is the oldest commissioned naval vessel afloat. It is not the oldest naval vessel but the keyword afloat makes the statement true. There is no information on how my site contributed to the harbor clean up but I can say that it resides in the Boston Harbor which was once a toxic environment.
In the harbor there are two islands, Spectacle and Deer Island, that played a major role in how the harbor was and what it is now. For years Spectacle island was a trash dump for the people living in Boston. It got its name because it looks like a pair of spectacles. The turning point that said enough is enough was when there was trash being dumped by a bulldozer and a guy almost lost his life. The best way to get rid of all the trash was to set it on fire and it was burning for 10 years. When that was done they stacked it up with the dirt from when Big Den was being dug up. Now we are able to visit the island and swim there as well.
Deer Island is the second largest waste treatment plant in the US. It is a multi billion plant that 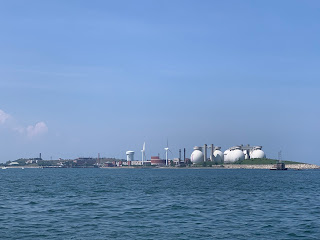 was built to help stop the dumping of your house waste into the harbor. In the 10 enormous egg shaped components help clean your waste and turn it into water you can drink. On the other hand the solid waste goes down to Florida where they use it to help fertilize their oranges. It is really astonishing how one of the dirtiest harbors in the country could turn around and become one of the cleanest. It was not easy or cheap but it was worth every cent of it. Now children can go fishing and eat what they catch. They can also go swimming without worrying of getting sick.

Catch you back for next week,