This week I was at castle island... well, it's really a peninsula. Me and my coworkers fished on the pier there and explored the park around the pier. We learned about the history of the island and we saw the monuments and the statues that honored fallen soldiers in battle. The general vibe of the place was just soothing to experience; the calming nature is truly something to treasure and preserve. families from all around come to the island and have a calming and fun time and while practicing social distancing you can go down to the shore and enjoy the water. 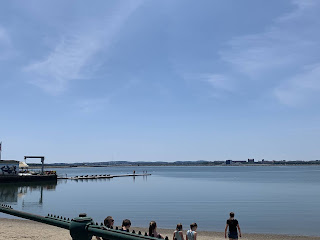 Some back story that we learned while one the island is the history of the harbor and how we became the cleanest urban harbor in america. Back in the 19th century there was no such thing as a good plumbing system. Human waste and foreign objects would just flow right into the harbor, causing a lot of damage to the ecosystem and to the people that lived around them. They would literally have sludge dumped at an alarming rate into the harbor. 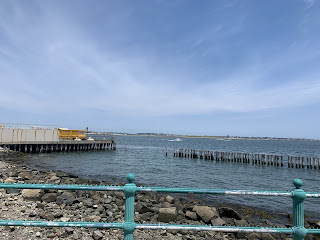 However in 1972 the clean water act helped Boston develop a good cleaning and filtering system that takes rain and waste water from the city and cleans it to go back to the harbor. We learned that by using the wind powered windmills and the sludge cleaners that sort of look like egg domes they can purify the water and dump it back in to the water clean! This way slowly but surely the ecosystem came back with many species of fish and other life being able to flourish now that the water is safe for them, which makes it good for people like us to fish off of the pier at castle island so we can teach the public about the many different species.
Dee 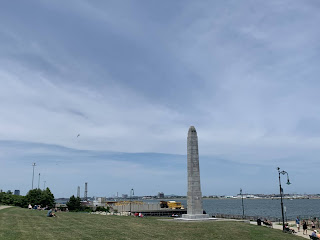