This week my group went to castle island and then went on the boat tour. While being in castle island we starting fishing. Sadly there was not a lot to offer because it was low tide. Also the location is not the best for fishing because if you use weights like we did it would get stuck on seaweed. We lost a lot of equipment because of that. We also created scientific drawing of the creates we knew were in the Boston Harbor. I drew a great white shark, the others drew less intense creatures. The day was beautiful and we had a good time. I had Sullivan's chicken nuggets and they were super good. Then on Thursday we went on a tour trip with David. He was the guide teaching us all about the Boston Harbor area and had a lot of knowledge. He really taught me a lot about the different islands and how they were named.
While working I saw many different animals. Two that really excited me was Sea Wrasse and Striper. We were in Castle island using a crab trap to see what kinds of crabs were there and we got lucky and got three wrasse. They all had a similar shade of brown which told me they lived in and near rocks. You can tell a lot about the environment on what the animals adaptations are. Then on Thursday I got even luckier. After the boat trip we got on a dock and I saw a glimpse of a fish shaped body. My eyes got really big and I felt like I was a kid in a Candy shop. There were six stripers under my feet. Then the boat guide gave me a rod and we tried to catch one. Sadly my luck ended because they were scared of the lure I was using. 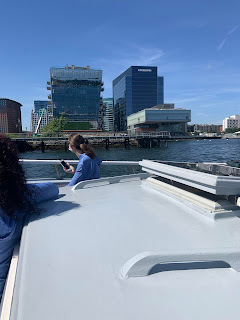