Keeping Up With Current Events at Constitution Beach

After reviewing a video created by Chris Busch on Climate Resliancy, I found a few things surprising. I knew that with climate change there would be rising sea levels and hotter overall climates, but I never took into consideration how these two aspects would affect cities. Busch addresses the effects of climate change in cities, specifically Boston, and how the heat will affect these densely populated areas. For example, areas with darker surfaces, such as buildings and paved roads would absorb much more of this heat, causing certain areas to be unbearable. He also mentions rising sea levels and illustrates what exactly a three foot sea level increase would do to the city’s shorelines.  As the water expands and elevates, it would wash out much of lower level areas of Boston, specifically the areas of Boston that have been built up over time. Some of the possible solutions are flood barriers and creating elevated buildings, however these would take more time, money and resources. 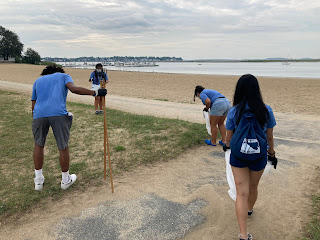 This week my group went to Constitution Beach. Constitution beach is a popular spot in East Boston to host gatherings and cookouts, and there are designated spots to set up picnics. This beach is the closest swimmable beach to the airport, and the water is incredibly clean, when compared to what it once was. We talked as a group this week about climate resilancy, specifically talking about preventing the creation of more greenhouse gas emissions from plastic waste. We took part in a beach clean-up, collecting trash from the beach to prevent it from contaminating the harbor. There can be a lot of plastic waste used at cookouts, and this plastic is incredibly harmful to marine life if it gets into the harbor. One way we can protect marine life in Boston is by “Refusing” to use plastic. This way we can “Reduce” the amount of plastic that gets into the ocean, and protect our beautiful beaches. 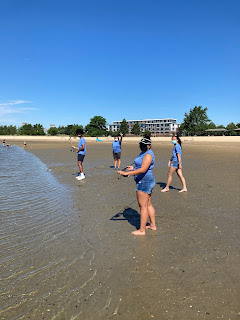 As rising waters are beginning to threaten neighborhoods in areas of Boston, people are wondering what is the solution? Globally, we have used about 9 billion tons of plastic since the 1950’s, yet around just 9 percent of this has been recycled. Around 79 percent is left in our environment, in our waters and neighborhoods. 50 percent of plastic is single-use or disposable plastic. As it does, sunlight and heat cause the plastic to release greenhouse gases, leading to a cycle. As our climate changes, the planet gets hotter, the plastic breaks down into more methane and ethylene, increasing the rate of climate change, and so perpetuating the cycle. We can do our best to stop this cycle by reducing, refusing, reusing, and recycling plastic, and being responsible for our environment!

SEA you next week!