Week one out on Castle Island in the books. This week I learned a lot of new things about the history of Castle Island. How it was where the British garrisoned their troops leading up to the revolution to keep them separate from the city. Also how Castle Island is called an island but it is no longer technically one. With the expansion of the shipping industry Castle Island was made into a peninsula to create more space to accommodate the expanding shipping infrastructure. 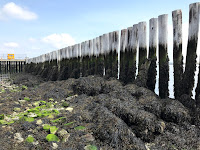 This week our topic was fishing and I learned a new way to tie on a hook and weight. It felt really great to get back outside and on the water after having spent so much time inside during quarantine. This week we unfortunately didn't catch any fish on our lines, however, we did catch a bunch in the crab trap. On our last day we went tide pooling under the pier. We found a Mussel bed and some Asian Shore Crabs under some of the big rocks. 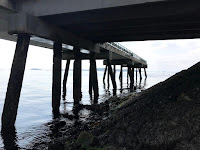 Us being able to catch crabs, fish, and muscles out on Castle Island would not have been possible or safe 40 years ago. Before the city built the water treatment facility out on Deer Island the harbor was filled with filth. Raw sewage and trash used to be dumped straight into the harbor making the water polluted and the animals living inside of it sick. Now when you flush the toilet it goes to Deer Island to be cleaned instead of straight out into the harbor. Boston Harbor is now one of the cleanest urban waterways in the world.