My first week of summer working for Save the Harbor was spent at the Charlestown Navy Yard. This was my second time being able to visit the Charlestown Navy yard. The first time I went was with Save the Harbor last year, when we got a special tour inside the museum and learned how different jobs that the workers on the U.S.S. Constitution had. This week, I got to explore more of the sites at the Navy yard, like the U.S.S. Cassin Young, which was a more modern battleship than the Constitution. There is also a cannon near the museum that was found while digging up the surrounding area. That cannon is fired every day in Charlestown. Also, there is a giant mast that is hoisted up next to the Charlestown cannon, bearing the American Flag. I think the coolest thing there is the dam that can hold ships out of water by letting water into the area, and then gradually draining it until said ship is rested on multiple big blocks of wood. I was fascinated at how well and creatively it was constructed. 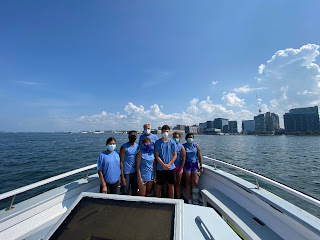 First day I was there, I talked with my teammates about what we were going to do for our lesson on the Navy Yard. We decided that our end product was going to be a video lesson on the Charlestown Navy Yard, along with the artifacts that were there. The second day, we drew pictures of what was there. We drew pictures of the Cassin Young and the Constitution, along with animals that lived there, like crabs and jellyfish. We also got two aquatic drones called the Poseidon. We dropped them into the water and tried to view what was under the waves, but the water was too murky. Even then, the drone started to swim in circles, so I just pulled it from the water. On the third day, we went to the Barking Crab to learn about the history of the harbor and the islands. One of the islands is supposedly cursed by a pirate on his last breath, which caused the island to become hidden in the high tide. Further out is the first lighthouse ever made, which has walls that are 17 feet thick at the base. Apparently, most of the islands have very simple names, like Deer Island, which was covered in deer, and Spectacle Island, which is shaped like a pair of eyeglasses.
To be quite honest, it was fun but not the most exciting site out there, mostly because the environment is pretty neutral. In the end, I look forward to working at my new site this week!
See you next time,
Aidan