Heyy everyone,
This week we went to Revere Beach which I have never actually been to, let alone get there on the trainnnn. I got lost a few times hehe. We took the day and walked along the beach finding different marine life and taking pictures, which was a lot harder than you would think considering the length of the beach (it's really far). We split into groups and picked up trash along the beach and our bags were pretty much full by the time we were done, and don't worry, we had a bag for recycling :). We read some articles about Revere Beach and I actually learned a lot about it, like there used to be huge events held there and amusement parks with lots of rides and dance halls. I also learned that the storm drains allowed the extra water to be let out into the harbor, which is okay because it's just storm water right? nooooope. Road runoff and litter would get into these drains, as well as the sand being blown around the beach which constantly clogged them. Basically their purpose was not being met because there ended up just being gross puddles surrounding the drain. ew. But it's okay now because the Department of Conservation and Recreation designed a system that consisted of 60 combined drainage inlets and storm water treatment units were also installed to clean the water. yayyy!
We researched some of the marine life we caught and put together a scavenger hunt. Some of the little things we found were: Clam shells, Oyster shells, Slipper shells, Periwinkles, Mussels/mussel shells, Razor clam shells, Crab carapace, Moon snail shells, Moon snail “sand collars”, Skate egg case, Scallop shells, Horseshoe crab carapace, Eel-grass, Ring-billed Gull, and the Piping Plover. We added these all to our scavenger hunt and one of the most interesting to me was the Periwinkles. We found a trail in the sand and literally tracked one down, it was so fun. The common periwinkle, (Littorina  littorea,) is the largest, most common and widespread of the northern species. They can be about 4cm and are found along the rocky shores of northern Europe and New England, and they spread as far as Maryland. You can find them on those big rocks you see at the beach and shallow muddy bottoms, along the banks of tidal estuaries, and among the roots and blades of marsh grass where the water is only a little salty. They are herbivores, and use their file-like tongue to feed on diatoms and algae attached to rocks. Though they're so small, they are actually a pretty interesting creature.
Another cool thing we found was the moon snail. We actually found the sand collar of it first and Luke told us more about it. Moon snails drill a countersink, a circular hole in the shell of their prey and then consume the soft body with their proboscis. Moon snails are known for their large size, which can be up  to 13cm (diameter). They are common along the coast but it is the empty shells that are usually seen washed up on the beaches, they live in sandy, shallow waters in the intertidal and subtidal zones. They eat other mollusks for food. The coolest thing about them to me is the collar which is made by the female moon snails when they lay eggs. Once we found one I felt like I was seeing them everywhere. 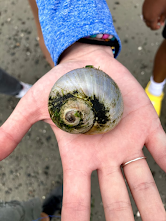 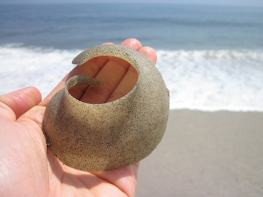 Moon Snail and Collar
It was a really fun week and I can't wait to see what we'll do for the next one.
Sea you out there!
-Jane
https://www.tybeemarinescience.org/naturalist/moon-snail/
https://www.amusingplanet.com/2017/06/the-sand-collars-of-moon-snail.html
https://www.britannica.com/animal/periwinkle-marine-snail
at 10:00 PM