This was the first week working at an actual site and I worked at Malibu beach on Morrissey Boulevard in Dorchester. This location wasn't like any other beach I've been to because it was originally a marsh. I've never been to a marsh before so it was kind of exciting. There were a lot of great things about this place such as how the sun was shining the whole time, how the sand felt between my toes, and the water was very relaxing to take a dip in after work. We spent the first day split into groups, one trying out the air drone and the other cleaning up trash. There were a lot of people that would run along the beach side with their dogs and it was cool how they would let us pet them when we were on break.
The next day we did the same thing and brainstormed how we were going to do the lesson plan. We also ended up trying out the lobster trap when it was low tide. We let it sit there the whole day and by the end of the day it was high tide and I went swimming looking for it. It was pretty fun. The next day we came in and Ruben found the trap sitting where it was left with three or four crabs in it. All of them were alive and one of them was a really feisty one.
We found a lot of little critters yesterday. There were hermit crabs, mollusks, a moon jelly, and a rabbit. The final day was spent cleaning up trash and finishing up with final thoughts on our lesson plan. I liked almost everything about the site but the only problem I had was the hydric soil. I kept sinking knee deep inside of it and it was sort of gross but felt kind of cool. My favorite part would have to be either finding the moon jellyfish or seeing all of the hermit crabs near the lock. This site is unique because it was originally a marsh and now it's a beach. Kids could benefit from this site because there was a lot of trash there and that would show them how pollution is affecting the environment. They would also learn about the different types of animals that inhabit the marsh. The image below shows me holding the moon jellyfish.
Catch you next week,
-Will 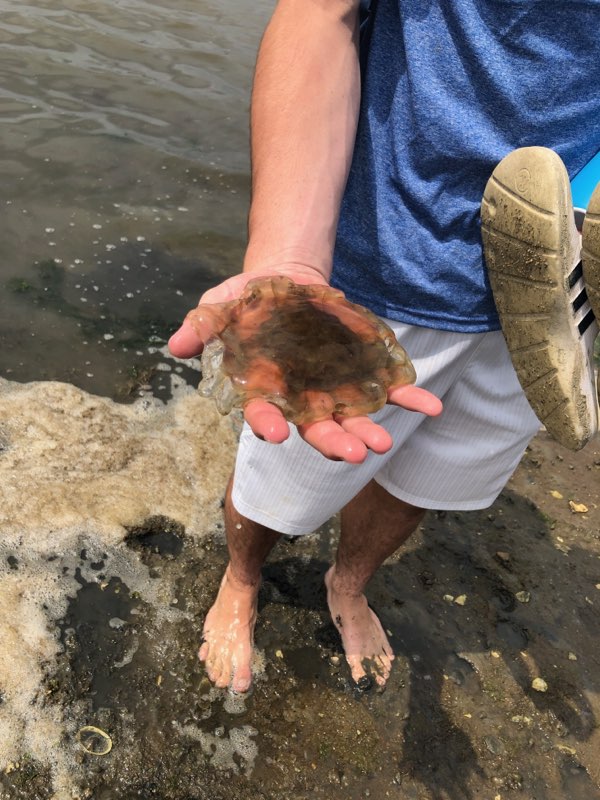