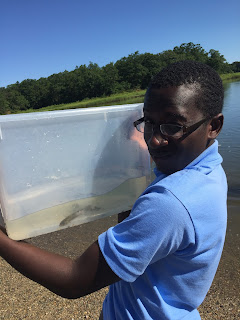 Monday was a jam packed day! Zach and I got in at Black's Creek around 8:45, and met Nieomi, Ana, and Edward there well near 8:57. After we all got settled in we got all the supplies ready for the day. The first group we had that day were pretty normal, we caught a good amount of green crabs, a lot of hermit crabs, and even the rare amount of shrimp the kids basically filled the bottom of the tank with hermit crabs. Then as usual halfway through exploring we asked the children which ones would like to go to the gaga pit, they all decided to go the pit so we all went up had some good games and by the end of the third round of gaga ball, it was time for the kids to go and the new group were starting to come in. And the second group were way more lucky with their exploration. About five to ten minutes in to exploring I caught this little fish. I didn't even know what kind of fish it was to be honest but the kids kept trying to feed it seaweed. 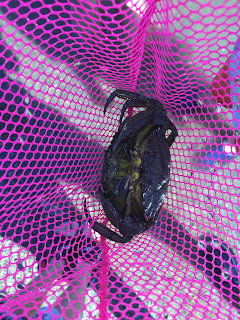 Then a good ten minutes after that, the children were looking at the crabs when they started to see the crabs "fighting" well turns were actually mating! I know because I tried to pick up one of them and they both came up stuck together. But after that we put all the crabs back in the water and by then it was time to go up the hill and play gaga ball. But the gaga pit was already taken so we had to improvise, we ended up playing museum and kickball.  And after a short game of kickball it was time for that group to go home too. And we didn't have to go to the Boston children's museum so after all the children made it back to their parents, we left and went home.