A Homerun for CHV!

My first week back to work after a week off has sure been an eventful one! For starters, I was move from Piers Park to Camp Harbor View. Although it’s sad to say goodbye to Piers, I was excited to see another site.
The first day was all introductions and gave us an opportunity to get a new group of kids excited to learn about the harbor. We did get a chance to explore the rocks along the water’s edge for asian shore crabs and periwinkles. The second day was a little bit more action packed. Rock crabs, green crabs, spider crabs and a small lobster were found in the traps. The lobster drew the attention of many of those on the pier and allowed us to explain the importance of this amazing creature, not only to people but also to the ecosystem. Fishing was uneventful, except for a skate which was caught using squid. The campers gathered around as the ray-like fish was unhooked and released. 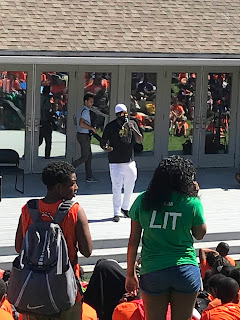 Thursday started with the usual office meeting and the message that a group from the Red Sox organization would join us on Long Island. We didn’t give much thought to who this representative would be and carried on as we would for any other day. After our morning group is done at the pier a boat pulls up to the floating dock and no other the David Ortiz himself gets off. We were shocked to say the least and excited at the same time. I grew up watching him play for the Red Sox and seeing him really brought me back to those days. I could think of no better role model to speak to campers at CHV. Big Papi imparted invaluable advice during his talk. He told his story of how he grew up in poverty, but was able to do something he was good at to get out of his situation. He also made sure to stress the importance of education and listening to your parents to the campers. Hopefully the advice he gave was taken to heart and will be useful to the campers. Later in the afternoon, I changed venues and travelled to South Boston to work Olliepalooza. We fish printed using flounder, helping to make educational art that children could take home.
Friday produced some crustacean action, but little else. A group of american oystercatchers did a flyby of the pier and a storm could be seen brewing over Quincy. After fishing club had left the dock and the equipment was put away, a few drops of rain could be felt. Soon some lightning was seen in the distance, accompanied by the occasional rumble of thunder. We boarder the Miss Peddocks with hopes to beat the storm back to Boston. Just as we were about to cast off the sky opened up above us and dumped buckets right over us as thunder and lightning cracked around us. We puttered through the storm and made it out unscathed, was definitely one of the more interesting boat rides I’ve ever taken. Although it was pretty sketchy at times, it was awesome to witness the power of Mother Nature.

Here’s to a new week, hopefully filled with more exciting experiences! I can’t wait to see what else CHV has to offer!