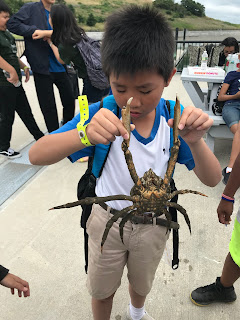 This week was fairly normal. I spent Monday at the Children's Museum with Erin, Ellen, and their crew. It was a nice day--not too hot. A reporter from the Boston Globe stopped by and took some photos of kids who stopped by to fish.

Tuesday through Thursday, we were on Spectacle for AABH. It was great because on the hot days, we were able to go swimming with David--which is always so much fun. One day, we spotted these beautiful bright yellow and black birds. They looked almost like finches. Unfortunately, my iPhone camera couldn't capture their beauty enough.

On Friday, at Atlantic Wharf, we had a great day with South Boston Neighborhood House (SBNH). Many of them were experienced with our activities, and had participated in fish printing the night before at Olliepalloza, but still had a great time fishing, coloring, and hanging out with us. We got a huge surprise, though, at the end of the day, when we decided to pull up our crab trap before leaving. Sam pulled it up, and wondered why it was so heavy... Turns out, there was a huge lobster caught in it! It was the largest lobster I have ever seen--probably close to 14 lbs! Unfortunately, it was too large to keep and eat (poor Briana was very disappointed, because she had called dibs on keeping it if it were the right size). 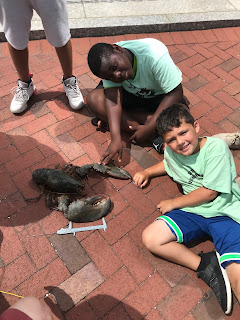 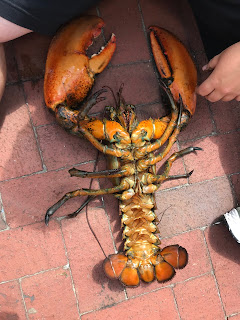