Getting Into The Groove - Week 2

Week 2 once again started with me going to Camp HarborView. The boat ride was not as energetic as my first, so I'm guessing the campers were already getting tired of each other. The day went by much quicker because we actually got to do some fishing instead of only speaking. We saw about three groups, but no one caught any fish, with the rods at least. There was a skate caught in the crab trap, along with a spider crab. Definitely a win for the day. It was my first time ever seeing a skate, and they definitely could pass as a stingray (RIP Steve Irwin). I was not the biggest fan of the spider crab naturally because I am not the biggest fan of actual spiders. Here's a picture of it. 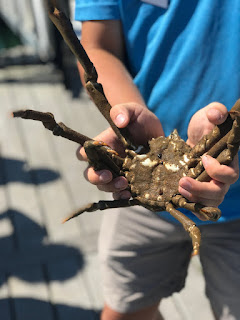 I was once again at All Access for the rest of the week. We went back to George's Island again, but this time I did a lot more exploring. I went through all of the forts on the island, including the dark tunnel. Seeing the kids run and scream going through the tunnel is still some of the best entertainment I've seen this summer. It is hilarious when these 12/13 year old kids are scared of a 40 foot tunnel. Even their counselors get a little timid when they can no longer look down and see their feet. I guess a wild David Coffin waiting in the tunnel doesn't make them feel more secure. I would definitely take some of my younger relatives to All Access once I get the chance to. 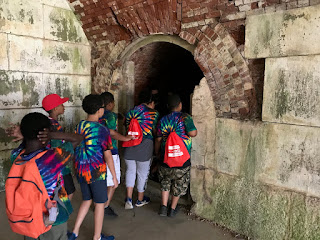