Hey everyone, this week I was moved to a new site! I went from Camp Harbor View to Black’s Creek in Quincy and I have to say that these sites are very different from one another. Blacks Creek is a smaller, quieter site with kids between the age of 6-7. We have two sessions each day which are only 90 minutes each which means that each session goes by pretty fast. We start out by searching the creek for snails, hermit crabs, green crabs and other cool creatures. After that we pull up the crab trap which usually has a lot of green crabs in it which are all different sizes. We show the kids how to differentiate between a male and a female crab and then we make a little quiz game out of it to see what they have learned. After that we walk up the hill to play a game called GaGa Ball.
GaGa Ball is a very interesting and competitive game that I just learned this week. There is a hexagon shaped ring that everyone gets in and the object is to get people out by hitting your opponents in the lower legs with the bouncy ball. It is a lot of fun to play and it is quite a workout playing with little kids because they are full of energy.

On Monday, my first time ever being at Blacks Creek, the fog was unreal. I could only see about 100 feet in front of me which means I had no idea what the site looked like until hours later when it cleared up. The temperature was perfect on monday which made it a nice day to play around in the water. Tuesday on the other hand was very hot and sticky. The kids wanted to swim and go in the water to cool off so badly but unfortunately they are not allowed to swim with us. It felt nice to go up the hill and take a break in the shade and play GaGa ball but then it was time for the second session and we had to do it all over again! It is nice to get different kids everyday to change it up because each kid has such different personalities. 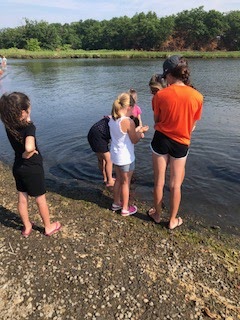 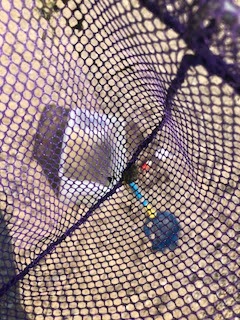 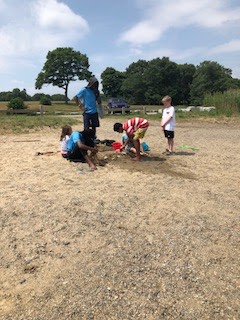 Wednesday was a regular day and we caught plenty of crabs to entertain the kids. The great thing about kids this young is that each crab is different to them and they can play with crabs for hours. They like to make a little pool that they fill up with water so that the crabs can swim around rather than being trapped in a bucket. At the end of the day on Wednesdays we go to the Curley Community Center in South Boston. We brought some crabs from Black’s Creek for the kids to play with since the beach the kids are at only has a few. We are only there for an hour once a week but it is nice to be at a different beach.
Thursday started out interesting right off the bat because we found a horseshoe crab! Since it was high tide when we got there at 9am the sand was different and the water was clear so Briana spotted him from far away. It was so cool to have something other than crabs and nobody was scared to touch the horseshoe crab which I was surprised by because they are very creepy looking. About an hour later we found another horseshoe crab which was bigger than the first one! The kids would not stop touching, poking and asking to hold the horseshoe crabs and it was awesome to see them so excited to interact with nature.
Friday was different this week because I went to Constitution Beach in East Boston for a community event that included fish printing and sand raking. Thanks to the sand raking expert, Andres Amador, we were able to make some beautiful designs in the sand. We also had Larry the Lobster in the touch tank which kids loved because they are much cooler than regular old crabs. There were some people from the circus that did some awesome tricks right in front of us! We got free snacks and slush from tables near us and that was cool because who doesn’t like free stuff?! It was a beautiful day for the event but nothing could be better than the weather we had on Saturday. 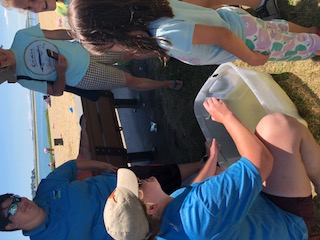 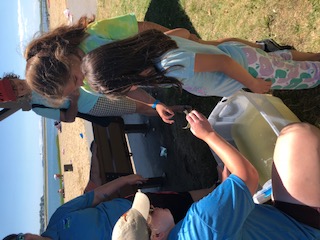 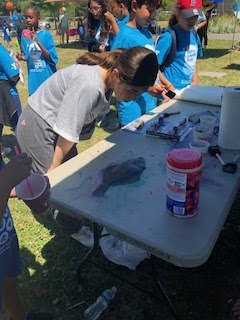 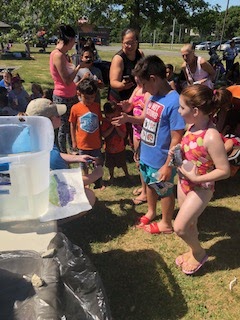 On Saturday I went to another Better Beaches event with Andres on Nantasket Beach in Hull, MA. When we first got there it was high tide which meant that there wasn’t much room for sand raking but after about an hour the tide moved out and the sand dried up which meant it was perfect for sand raking. While Andres was entertaining a group on the beach, I was on another part of the beach making pictures of animals in the sand to attract people and direct them to Andres for the real project. I had a lot of people come up to me because they were really interested in the work we were doing and because they wanted to join the project! The really cool thing about what Andres does is that once it is finished he flies a drone up in the air to capture the art from above and it is always amazing to see your finished work! The weather was perfect for a day on the beach because the sun was out but there was a beautiful breeze. When the tide came back in the day was over and all of our art washed away but we got some great pictures just in time! 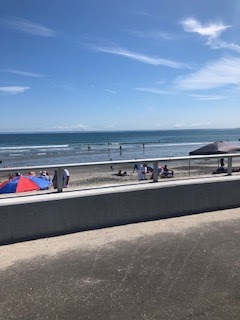 That’s everything I did for this week but i’ll be sure to let all of you readers know about my adventures next week! Bye for now!
-Maeve Fittz