We entered this week with some interesting weather. Both Monday and Tuesday were incredibly foggy and added a sense of mystery while hanging out on Long Island at CHV. At the end of the week, we took a trip to the Edward M Kennedy Center to learn about our legislature.
A couple overcast, foggy days were well needed after being hit with day after day of scorching heat. The fog had gotten so thick at times where if you were at one end of the pier, it was almost impossible to see the other end. Despite the ominous weather, we still managed to have a great time fishing! We didn’t have much luck on the poles, but we had some crabs and even got to observe a seal swimming about the pier. Later on in the week the gloom lifted and brought back some nicer weather to the harbor islands. After a day of no fish we were shocked to find dozens of crabs in the trap which captivated all of fishing club. 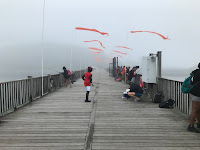 We participated in an activity that was a little different from things we had done in past weeks. We got to tour the Edward M. Kennedy Center and learn all about the institution that EMK loved, the United States Senate. Although this wasn’t exactly intertwined with Boston Harbor, it is important that we understand the way our government works. Landmark legislation has led to many environmental successes. Environmental legislation dates back over 100 years including the Clean Air Act, Clean Water Act, Endangered Species Act and many others. The institution of the Clean Water Act allowed for the cities of Boston and Quincy to sue for the clean up of Boston Harbor to turn it into the place we know today. It was a pleasure to participate in the tour of the EMK Center and I was grateful to have received a lesson on how our government works.

Next week will be full of exciting activities, from staff day on Monday to the two fishing trips scheduled on Tuesday and Wednesday!