On Thursday August 2nd, the Metropolitan Beaches Commission hosting a public hearing in Quincy regarding the Department of Conservation and Recreation's Wollaston Beach, with the goal of hearing public comment from the people who love the beach. With 50 community members in attendance there were good opportunities for the Commission to hear their thoughts on the area. 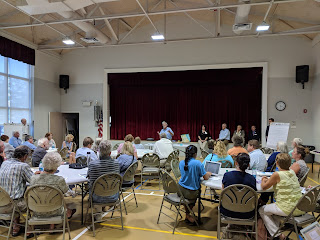 Quincy Commissioners Senator John Keenan and Doug Gutro opened the meeting by thanking participants for their time and their commitment to this incredible community resource. Commission Co-Chairs Senator Brendan Crighton and Representative RoseLee Vincent both expressed their appreciation and desire to learn about the issues that affect Wollaston in order to understand what issues are shared across the region’s beaches as well as what is unique.

Commissioner Susan Hamilton of DCR encouraging everyone to offer as much feedback as possible so that we can continue to improve Wollaston Beach.

Bruce Berman of Save the Harbor/Save the Bay and MBC consultant David Spillane of Goody Clancy introduced the Commission and told some of it's history. Berman announced that as a result of advocacy by the MBC and other stakeholders, $20 million was appropriated as part of the environmental bond bill to fund capital projects on the region’s beaches to address remaining persistent pollution and water quality concerns. 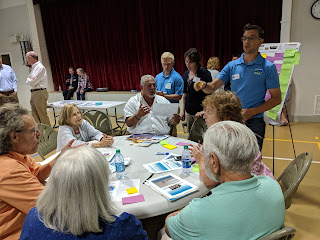 After this, Berman and Spillane gave directions for the break out groups. Participants made five groups of approximately eight people each, and after discussion reported out their comments and concerns. This feedback fell into the following areas:

Connections and other Initiatives

In summarizing her group’s feedback, president of the Friends of Wollaston beach Maureen Mazrimas said “although many issues seem to be same as 2014, on balance much has been improved.” 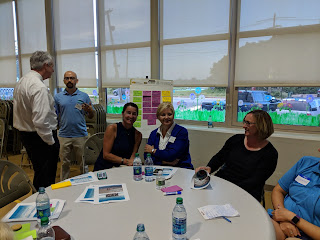 After each group had presented their work, a discussion opened about the process to get more food vendors such as carts or trucks at a DCR beach – how vendors are selected, what the decision making criteria are, how to get the word out to other potential partners on the beaches, and more. It was generally agreed that the MBC should work to connect DCR’s information about the vendor selection process to community groups who can spread the word to a wider audience.

Senator Keenan gave an update on the effort to increase ferry services, particularly from Squantum Point Park, saying that in partnership with the City of Winthrop, progress is being made. One participant praised the Saturday ferry service from Squantum to Spectacle Island.

Gutro thanked everyone for attending, saying how exciting it is to see the progress that has been made in the last ten years, as well as to see that momentum is not slowing down.

Hamilton particularly thanked the crowd for their kind words about Wollaton’s Beach Manager, and promised to share the comments with her personally.