The second CHV fishing trip of the summer was a ton of fun, we managed to catch about 5 striped bass, 10 skates, and a couple of sea bass. And our large haul would have been even more impressive, if the trip wasn’t cut short due to rainy weather. I was also able to catch a couple of fish and a crab during the trip, which was the first time I had caught a fish in over a year! But I am more proud of the campers who were able to catch some impressive fish, which they largely did on their own. One camper even managed to catch 5 fish on his own, including a skate, striper, and a sea bass. He was estatic, as he wasn’t able to catch many fish at Camp Harborview during the last couple of weeks.

While there were some periods of time where we struggled to catch fish, not a single dull moment occurred during the trip, as all the kids were active, engaged, and having fun. The trip was also a good opportunity to talk to some of the kids in depth more and be able to get to know them better, which was one of the best aspects of the fishing trip


Many of the campers caught their first fish of the summer during the trip, and some even caught their first fish ever, which were some exciting moments to experience. In my opinion the best part of our fishing trips and our work at CHV as a whole is giving kids the opportunity to do things they’ve never had the chance to do. I look forward to being able to continue our work during the rest of first session and during the next session. 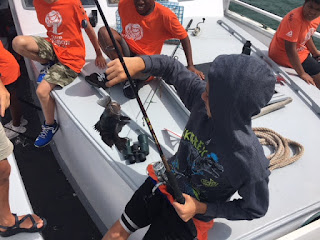 One of the campers prized fish

Until Next Time, Abel Yohannes