On Monday I was scheduled for Piers Park. I was placed with Qalid and Albert. It was a very fun week. We got off to our regular schedule where we played a couple of games to get our blood pumping and body awake. After we went down to the dock and did Kayaking and fishing for a couple minutes. Then we went back up to the tent where we played dictionary. Pictionary is where we would draw pictures that was related to something in the ocean and then one out of the four teams would guess what that image is you would gain a point. We also played Indian chief where one of the kids would control all  the actions and everyone else in the circle would follow while some tries to guess who is controlling the crowd. On Tuesday we went to Courageous sailing center. Sadly, that was the last day of programming there for us.  We played Pictionary there as well and fished. I would always see a fish swim by but they would never bite or even go close to the hook. 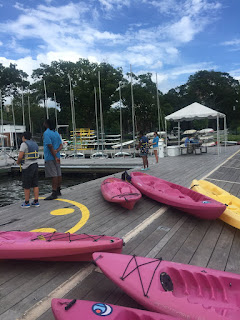 On Thursday we had our weekly staff meeting where spoke about how our week went, our schedules and what we can work on to better programming.