Citizen Scientists at Save the Harbor/Save the Bay 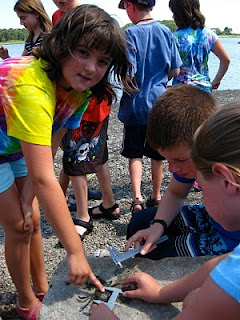 Many hands make for light work, as the saying goes—but in the case of researchers studying invasive species, the many hands and eyes they borrow from Citizen Scientists make it possible for a few researchers to study huge stretches of coastline. Dr. Judith Pederson, a professor with MIT’s Sea Grant College Program, has enlisted the help of Save the Harbor/Save the Bay’s Boston Harbor Explorers togather data on the abundance, density, size and gender of invasive crabs in Boston Harbor. Dr. Judy and her fellow researchers put this data to use in several important ways, making our Boston Harbor Explorers part of a scientific pursuit that’s very important and widespread.

First, field observations by citizen scientists often yield new and unexpected observations. Citizen scientists, by virtue of the sheer volume of data they can collect, are a wonderful resource for tracking the spread of invasive organisms. In a study of invasive crabs conducted in 2005, a volunteer Citizen Scientist recorded a 40-mile northward range expansion by Asian Shore Crabs in Maine (Delaney et al. 2008). In layman’s terms, an amateur scientist discovered an Asian Shore Crab 40 miles farther north than anyone had ever seen one before! 40 miles is an incredible distance for a crab that rarely grows larger than a few inches across. The fact that Asian Shore Crabs were able to spread so quickly is a testament to how adaptable and prolific these invaders are.
Second, each additional Citizen Scientist gives researchers another pair of eyes and hands to observe and record new data. Scientists can then use the data that Citizen Scientists collect to produce models of how invasive organisms reproduce and establish themselves in their

new habitats; these detailed computer models take into account features like water temperature, salinity, and the direction of ocean currents to estimate how quickly an invasive species will establish itself in a new environment. Understanding the population dynamics of an invasive species is an essential step before the invader can be contained or eradicated.

Together, these two facets of Citizen Science—novel observations combined with data collection—make this approach ideally suited to tackling the challenges presented by invasive species. The earlier that scientists notice that an invasive species has spread to and established itself in an area, the easier it is to eradicate the invader. The longer that government agencies take to act on an invasive species threat, the more time the invader has to reproduce and expand its range. The fact that Citizen Scientists can be trained to recognize new invasive species means they can assist researchers and public agencies in stopping invaders before they become too plentiful in their new habitats. To that end, the “Hitchhikers” guide that MIT Sea Grant publishes includes several anticipated invaders in addition to the introduced species that are already commonplace on New England’s shores. Our Boston Harbor Explorers learn how to recognize not only the invaders that are already here, but also any new species that have yet to gain a foothold here in the Boston Harbor.

Knowledge is power. Learning how to recognize and prevent the spread of invasive species enables our Boston Harbor Explorers to take an active role in preserving the harbor’s native species for future generations.

Nice post emily. Thanks for all your hard work.