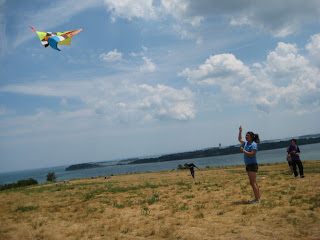 Today was the first day of All Access Boston Harbor this week. Also, as a new co-worker, Tim Grogan joined us on his very first day with Carolyn, which was her first day on All Access as well, who I both had the pleasure of meeting. We went to Spectacle Island and had lots fun. I won a hula hoop competition even though opponents were a couple of years younger than me. Hahahahaa :) David, Carolyn, and I went up the north drumlin to fly the rainbow-colored kites. That was quite a hike although we used the shortcut. We had a bit of a trouble getting the kites up there, but once they were up, they stayed up for a very long time. Before we boarded the Virginia C-II to leave, I quickly jumped into the salty water.... only to be grabbed by the foot by one of the kids we took out to the island! David and I flipped numerous kids into the ocean water. This day was very exciting and I can't wait to go on another trip out tomorrow! :D
Thi Mai Tran
at 3:00 PM