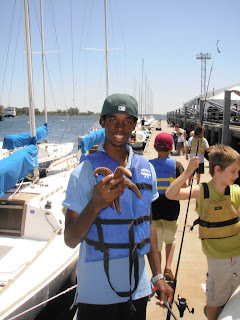 After two days of fishing, and not catching a single fish, I am very excited to report that our third day at Camp Harbor View was a SUCCESS!! We not only caught one fish, but three, one for each of the days we worked this week. The first one we caught was a skate, and it took a team effort to bring it in. I casted, Tom noticed the bite, Steven (camper) and I tried wheeling it in but only got half way until Tom helped us out. Everyone got very excited when they saw the fish; we took pictures, felt the spikes on the back and then released it. After waiting three days to catch one fish, it was quite astonishing that we caught two more in quick succession. Tom caught the second fish, and then later, one of the campers caught the third one, which was also a skate. It was the perfect way to end my week working at Camp Harbor View.
- Cesc
at 1:17 AM